Columbus: What We Do Now 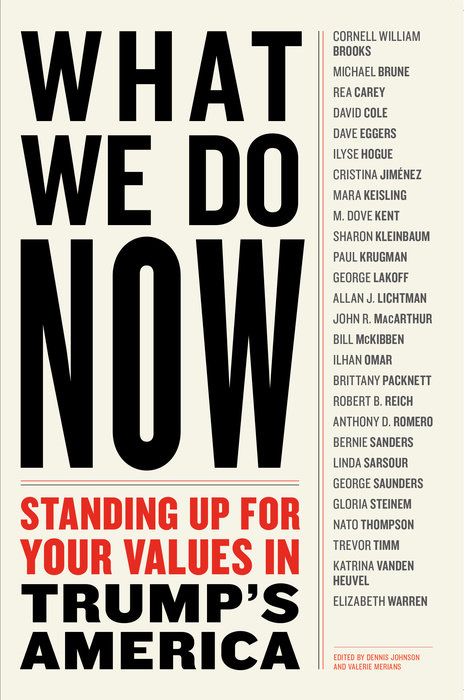 On Thursday, January 19th at 7pm, please join Harper's Magazine, Melville House, and Book Culture for a panel discussion on What We Do Now: Standing Up for Your Values in Trump's America. Panelists will include Dennis Johnson, John R. MacArthur, and Rabbi Sharon Kleinbaum.

The election of Donald Trump to be the 45th President of the United States of America shocked and dismayed progressives across the country. What We Do Now, a collection of passionate manifestos by some of the country’s leading progressives, aims to provide a blueprint for how those stunned progressives can move forward. Its powerful contributions — from economists, environmentalists, activists, artists, politicians, and novelists — will offer encouragement and guidance to practicing constitutionally protected acts of resistance throughout the unprecedented upcoming administration.

Among the contributors are Bernie Sanders, Elizabeth Warren, Gloria Steinem, Paul Krugman, Robert B. Reich, George Saunders and Dave Eggers as well the heads of the ACLU, the NAACP, the Sierra Club, the Arab American Association, the National GLBTQ Task Force, the Freedom of the Press Association, and other prominent activists.

Dennis Johnson is the founder of MobyLives, and the co-founder and co-publisher of Melville House.

John R. MacArthur is an American journalist and author of books about US politics. He is the president of Harper's Magazine and is a part-owner of Book Culture on Columbus.

Sharon Kleinbaum is the spiritual leader of Congregation Beit Simchat Torah, in New York City, the world’s largest LGBT synagogue. She has served as a Commissioner on New York City’s Commission on Human Rights, and on the U.S Department of State’s Religion and Foreign Policy Working Group Sub-working Group on Social Justice.

WHAT WE DO NOW: Standing Up for Your Values in Trump's America (Paperback)