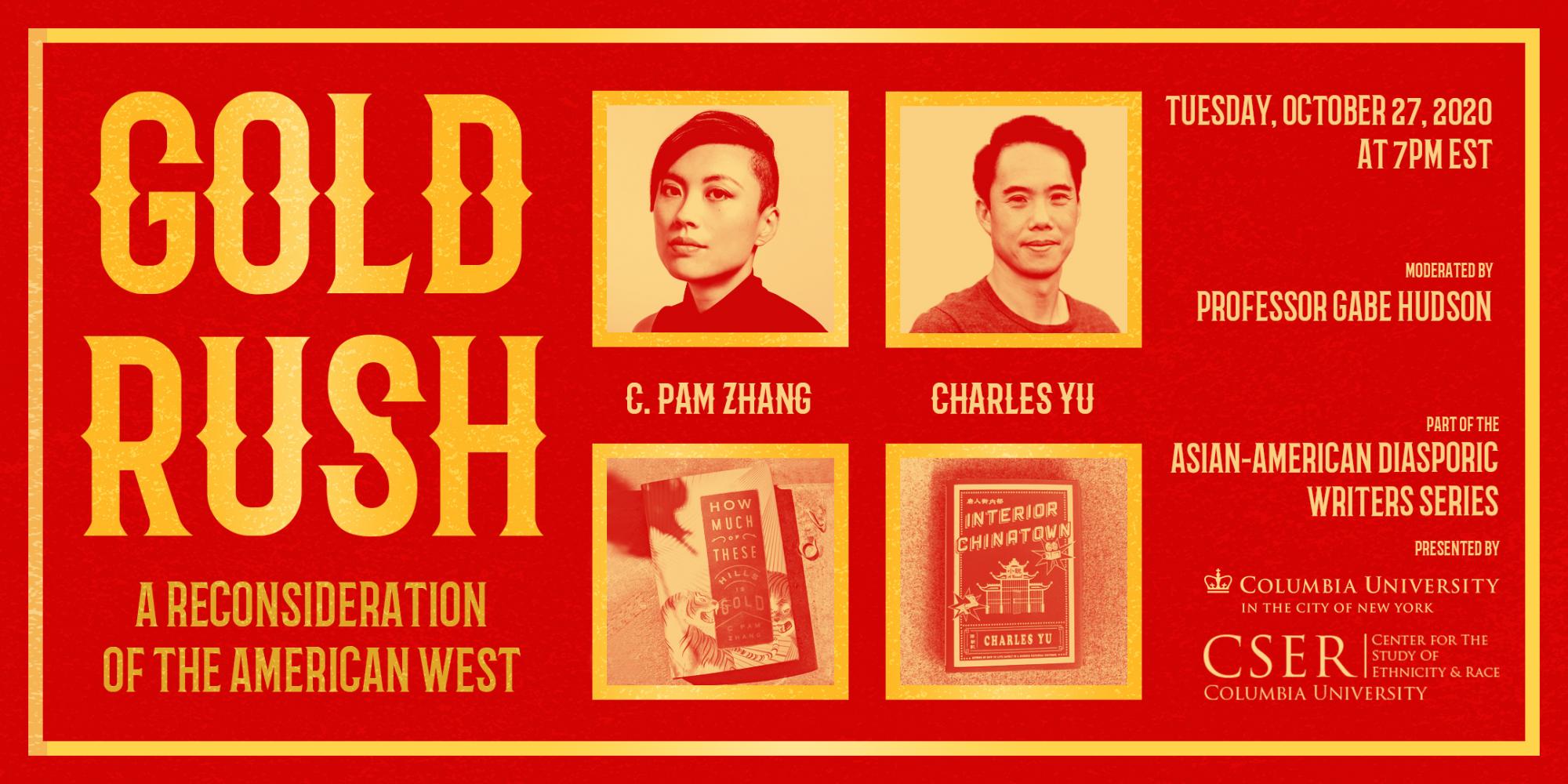 On Tuesday, October 27th at 7pm, the Asian American Diasporic Writers Series By CSER At Columbia University presents Gold Rush: A Reconsideration of the American West with C Pam Zhang and Charles Yu.

The first Asian American Diasporic Writers Series event of the semester! Professor Gabe Hudson moderates a conversation with C Pam Zhang, author of How Much of These Hills Is Gold (Riverhead Books, 2020), and Charles Yu, author of Interior Chinatown (Pantheon Books, 2020). The event will kick off with a reading and discussion followed by a Q&A. Questions can be asked during the Zoom discussion or submitted before the event to acg2204@columbia.edu. We look forward to seeing you there!

"Exhilarating...Unweaves the myths of the American West and offers in their place a gorgeous, broken, soulful, feral song of family and yearning, origin and earth. C Pam Zhang is a brilliant, fearless writer. This book is a wonder." --Garth Greenwell, author of What Belongs to You

Born in Beijing but mostly an artifact of the United States, C Pam Zhang has lived in thirteen cities across four countries and is still looking for home. She has been awarded support from Tin House, Bread Loaf, Aspen Words, and elsewhere, and currently lives in San Francisco.

"Brilliantly unexpected and inventive. It upended all the things I was sure I knew about the insidious power of stereotypes and left me feeling a little more hopeful for our collective future. Charles Yu's writing is transformative." --Jade Chang, author of The Wangs vs. The World

Charles Yu is the author of three books, including the novel How to Live Safely in a Science Fictional Universe (a New York Times Notable Book and a Time magazine best book of the year). He received the National Book Foundation’s 5 Under 35 Award and was nominated for two Writers Guild of America Awards for his work on the HBO series, Westworld. He has also written for shows on FX, AMC, and HBO. His fiction and nonfiction have appeared in The New Yorker, The New York Times, The Wall Street Journal, and Wired, among other publications.

"Dear Mr. President is a war book like no other. The stories are a surreal mix of the tragic, the violent and the humorous, like war itself. It’s as if Salvador Dali had rewritten All Quiet on the Western Front.” --USA Today

Gabe Hudson has published 2 books from Knopf, and was named a Best Young American Novelist by Granta. His work has appeared in The New Yorker, The New York Times Magazine, McSweeney’s, BuzzFeed, Granta, and others. For many years, he was Editor-at-Large for McSweeney’s. His honors include PEN/Hemingway Finalist, the Hodder Fellowship from Princeton University, the John Hawkes Prize in Fiction from Brown University, the Adele Steiner Burleson Award in Fiction from the University of Texas, and the Sue Kaufman Prize for First Fiction from the American Academy of Arts and Letters. He has taught at Princeton University, Yonsei University in Seoul, and currently teaches at Columbia University.

How Much of These Hills Is Gold: A Novel (Hardcover)