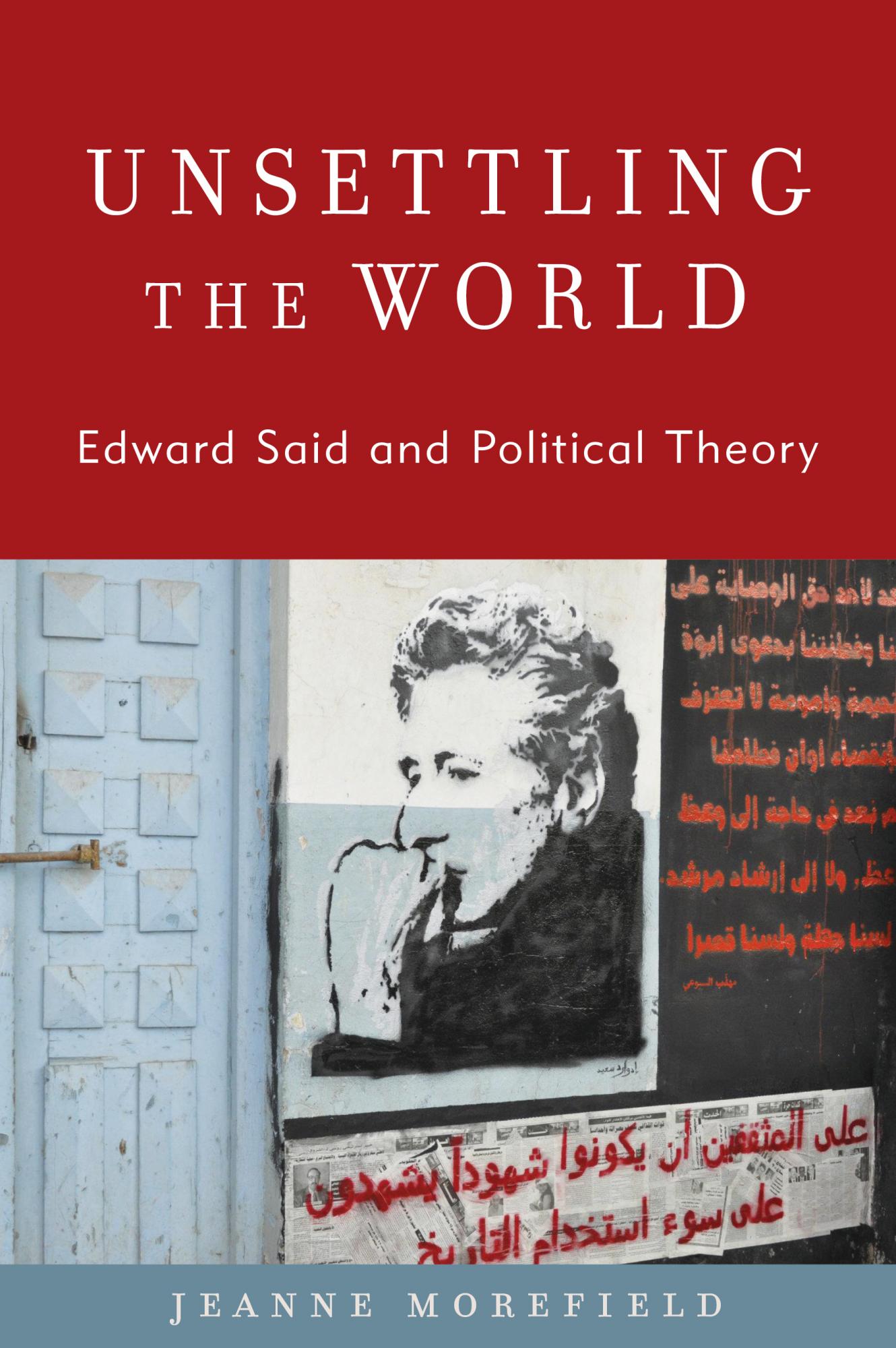 Join us Thursday, September 29th at 7pm for a panel conversation in celebration of the recent release of Unsettling the World: Edward Said and Political Theory by Jeanne Morefield. She will be in conversation with Bruce Robbins, Hamid Dabashi, and Akeel Bilgrami.

Unsettling the World is the first book-length treatment of Edward Said's influential cultural criticism from the perspective of a political theorist. Arguing that the generative power of Said's thought extends well beyond Orientalism, the book explores Said's writings on the experience of exile, the practice of "contrapuntal" criticism, and the illuminating potential of worldly humanism. Said's critical vision, Morefield argues, provides a fresh perspective on debates in political theory about subjectivity, global justice, identity, and the history of political thought. Most importantly, she maintains, Said's approach offers theorists a model of how to bring the insights developed through historical analyses of imperialism and anti-colonialism to bear on critiques of contemporary global crises and the politics of American foreign policy.

Jeanne Morefield is associate professor of Political Theory and fellow at New College, University of Oxford. She is also a non-residential fellow at the Quincy Institute for Responsible Statecraft, Washington DC. She is author of Empires without Imperialism: Anglo American Decline and the Politics of Deflection (Oxford UP, 2014) and Covenants without Swords: Idealist Liberalism and the Spirit of Empire (Princeton UP, 2005).

Bruce Robbins is Old Dominion Foundation Professor in the Humanities at Columbia University.   He previously taught at the universities of Geneva and Lausanne as well as Rutgers University. His most recent books are The Beneficiary (Duke UP, 2017) and Cosmopolitanisms, co-edited with Paulo Horta (NYU UP, 2017).  He is the director of two documentaries, “Some of My Best Friends Are Zionists” and “What Kind of Jew Is Shlomo Sand?”  Book Culture will host a launch event for Criticism and Politics: A Polemical Introduction (Stanford UP, 2022), on October 6th.

Hamid Dabashi is the Hagop Kevorkian Professor of Iranian Studies and Comparative Literature at Columbia University. His many – and widely translated – publications include: Authority in Islam (1989); Theology of Discontent (1993); Truth and Narrative (1999); Close Up: Iranian Cinema, Past, Present, Future (2001); Staging a Revolution: The Art of Persuasion in the Islamic Republic of Iran (2000); Masters and Masterpieces of Iranian Cinema (2007); Iran: A People Interrupted (2007); and an edited volume, Dreams of a Nation: On Palestinian Cinema (2006). Among his most recent books are Can Non-Europeans Think? (Zed Books, 2015); Persophilia: Persian Culture on the Global Scene (Harvard, 2015); Iran without Borders: Towards a Critique of the Postcolonial Nation (Verso, 2016); Iran: Rebirth of a Nation (Routledge, 2017); The Shahnameh: The Persian Epic as World Literature (Columbia, 2019).

Akeel Bilgrami holds the Sidney Morgenbesser Chair of Philosophy at Columbia University, where he is also a Professor on the Committee on Global Thought. He has been the Director of the Heyman Centre for the Humanities from 2003-2011 as well as the Director of the South Asian Institute at Columbia from 2013-2016.  His publications include the books Belief and Meaning (Blackwell, 1992), Self-Knowledge and Resentment (Harvard University Press, 2006), and Secularism, Identity and Enchantment (Harvard University Press 2014).  He is due to publish two new books in the near future: What is a Muslim? (Princeton University Press) and Gandhi's Integrity (Columbia University Press). His long-term future work is on the relations between agency, value, and practical reason.

END_OF_DOCUMENT_TOKEN_TO_BE_REPLACED

Women in Translation Month
Our Most Anticipated Books for August 2022
Booker Longlist 2022
Q & A with Ellen Jovin, the Rebel with a Clause
Author Q&A with Jules Ohman
June 2022 Selects from Molly!
Which Book Culture 112th Bookseller Are You?
Our Most Anticipated Books for July 2022
Pride Reads 2022: On our minds
Pride reads 2022: Classic story tropes, but make them queer