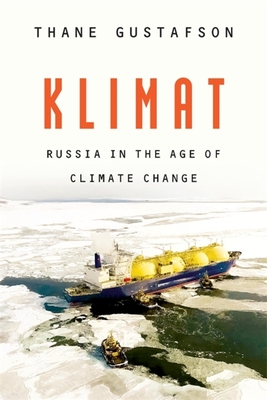 Please join the Harriman Institute for a presentation by Thane Gustafson, author of Klimat: Russia in the Age of Climate Change (Harvard University Press, 2021) and winner of the 2021 Marshall D. Shulman Book Prize for his book The Bridge: Natural Gas in a Redivided Europe (HUP, 2020). Moderated by Kimberly Marten (Harriman Institute).

Russia will be one of the countries most affected by climate change. No major power is more economically dependent on the export of hydrocarbons; at the same time, two-thirds of Russia’s territory lies in the arctic north, where melting permafrost is already imposing growing damage. Climate change also brings drought and floods to Russia’s south, threatening the country’s agricultural exports.

Thane Gustafson predicts that, over the next thirty years, climate change will leave a dramatic imprint on Russia. The decline of fossil fuel use is already underway, and restrictions on hydrocarbons will only tighten, cutting fuel prices and slashing Russia’s export revenues. Yet Russia has no substitutes for oil and gas revenues. The country is unprepared for the worldwide transition to renewable energy, as Russian leaders continue to invest the national wealth in oil and gas while dismissing the promise of post-carbon technologies. Nor has the state made efforts to offset the direct damage that climate change will do inside the country. Optimists point to new opportunities—higher temperatures could increase agricultural yields, the melting of arctic ice may open year-round shipping lanes in the far north, and Russia could become a global nuclear-energy supplier. But the eventual post-Putin generation of Russian leaders will nonetheless face enormous handicaps, as their country finds itself weaker than at any time in the preceding century.

Lucid and thought-provoking, Klimat shows how climate change is poised to alter the global order, potentially toppling even great powers from their perches.

Thane Gustafson is Professor of Government at Georgetown University. A widely recognized authority on Russian political economy and formerly a professor at Harvard University, he is the author of many books, including The Bridge: Natural Gas in a Redivided Europe, for which he won the Marshall D. Shulman Book Prize in 2021. His others books include Wheel of Fortune: The Battle for Oil and Power in Russia and Russia 2010: And What It Means for the World (coauthored with Daniel Yergin).

Kimberly Marten is Professor of Political Science at Barnard College, and a faculty member of Columbia’s Harriman Institute for Russian and East-Central European Studies and the Saltzman Institute of War and Peace Studies. She specializes in international relations and international security, with a keen interest in Russia. Her current research focuses on the politics of the changing Arctic, which she recently discussed on the Expert Opinions podcast published by the Harriman Institute and Eurasianet.

Klimat: Russia in the Age of Climate Change (Hardcover)