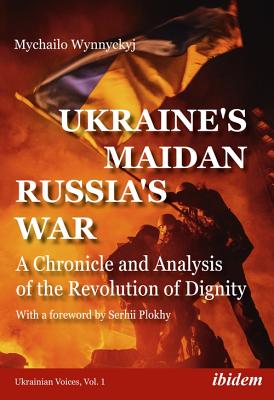 Please join the Ukrainian Studies Program at the Harriman Institute for a presentation by Mychailo Wynnyckyj of his book Ukraine’s Maidan, Russia’s War: A Chronicle and Analysis of the Revolution of Dignity (ibidem Press, 2019). Moderated by Mark Andryczyk (Harriman Institute).

In early 2014, sparked by an assault by their government on peaceful students, Ukrainians rose up against a deeply corrupt, Moscow-backed regime. Initially demonstrating under the banner of EU integration, the Maidan protesters proclaimed their right to a dignified existence; they learned to organize, to act collectively, to become a civil society. Most prominently, they established a new Ukrainian identity: territorial, inclusive, and present-focused with powerful mobilizing symbols.

Driven by an urban “bourgeoisie” that rejected the hierarchies of industrial society in favor of a postmodern heterarchy, a previously passive post-Soviet country experienced a profound social revolution that generated new senses: “Dignity” and “fairness” became rallying cries for millions. Europe as the symbolic target of political aspiration gradually faded, but the impact (including on Europe) of Ukraine’s revolution remained. When Russia invaded—illegally annexing Crimea and then feeding continuous military conflict in the Donbas—Ukrainians responded with a massive volunteer effort and touching patriotism. In the process, they transformed their country, the region, and indeed the world.

This book provides a chronicle of Ukraine’s Maidan and Russia’s ongoing war, and puts forth an analysis of the Revolution of Dignity from the perspective of a participant observer.

“Many of the major trends of international politics in the twenty-first century are best seen from Ukraine. Understanding the Ukrainian revolution of 2013–2014, and the Russian invasion that followed, are absolutely essential to any informed discussion of the state of the world.  This book, rich in chronology, evidence, scholarly analysis, and human insight, is a major step towards such an understanding. It should be widely read by those interested in Eastern Europe, the European Union, digital war, and the possibilities for new forms of politics.”—Timothy D. Snyder, Richard C. Levin Professor of History, Yale University

Mychailo Wynnyckyj is Associate Professor at the National University “Kyiv-Mohyla Academy” and Lviv Business School of Ukrainian Catholic University. He has also served as Advisor to Ukraine’s Minister of Education and Science and in 2019 was appointed Head of the Secretariat of Ukraine’s National Agency for Higher Education Quality Assurance. Wynnyckyj was awarded a PhD in Economic Sociology in 2003 from the University of Cambridge. In 2008-2013 he served as Director of the Doctoral School at Kyiv-Mohyla Academy where he oversaw a project aimed at reforming the traditional Ukrainian “aspirantura” system into a European-styled Doctorate. These activities led to his direct involvement in educational reform, and in Ukrainian politics more generally. During the Revolution of Dignity, Mychailo was a regular commentator for English-language media outlets, and provided analysis on current events in his “Thoughts from Kyiv” blog. Originally from Canada, he has lived permanently in Kyiv with his wife and four children since 2003. Wynnyckyj’s book Ukraine’s Maidan, Russia’s War: A Chronicle and Analysis of the Revolution of Dignity was published by Ibidem Verlag in 2019 (distributed by Columbia University Press), and in Ukrainian translation in 2021.

Ukraine's Maidan, Russia's War: A Chronicle and Analysis of the Revolution of Dignity (Paperback)