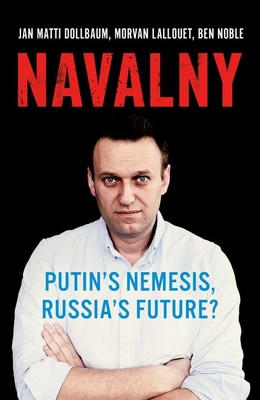 Who is Alexei Navalny? Poisoned in August 2020 and transported to Germany for treatment, the politician returned to Russia in January 2021 in the full glare of the world media. His immediate detention at passport control set the stage for an explosive showdown with Vladimir Putin.

But Navalny means very different things to different people. To some, he is a democratic hero. To others, he is betraying the Motherland. To others still, he is a dangerous nationalist. This book explores the many dimensions of Navalny’s political life, from his pioneering anti-corruption investigations to his ideas and leadership of a political movement. It also looks at how his activities and the Kremlin’s strategies have shaped one another.

Navalny makes sense of this divisive character, revealing the contradictions of a man who is the second most important political figure in Russia—even when behind bars. In order to understand modern Russia, you need to understand Alexei Navalny.

Jan Matti Bollbaum is a postdoctoral researcher at the Research Center on Inequality and Social Policy (SOCIUM) at the University of Bremen, specialising in activism and civil society in Russia. He is also an Associated Junior Fellow at the Hanse-Wissenschaftskolleg (Institute for Advanced Study, HWK) and an affiliated researcher at the Research Centre for East European Studies at the University of Bremen. He tweets as @JanMattiD.

Ben Noble is Associate Professor in Russian Politics at University College London, a Senior Researcher at the Higher School of Economics, Moscow, and an Associate Fellow at Chatham House (the Royal Institute of International Affairs). Ben’s research focuses on authoritarianism, legislative politics, comparative politics, and Russian domestic politics. He regularly contributes to media discussions about contemporary Russian domestic politics, with bylines and commentary in general-readership publications, including The Times, Newsweek, Bloomberg Opinion, The Telegraph, Foreign Policy, The Washington Post ‘Monkey Cage’, Vedomosti, and The Moscow Times. He tweets as @Ben_H_Noble.