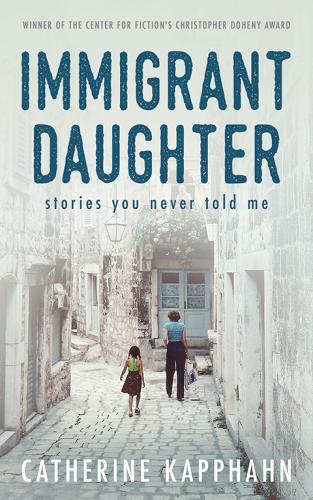 Join Book Culture LIC on Friday, December 6th at 6:30pm as we celebrate the release of Catherine Kapphahn's new memoir, Immigrant Daughter: Stories You Never Told Me. Kapphahn will be joined in conversation by authors Mary Catherine Ford (Fury: Women's Lived Experiences During the Trump Era), Jane Pollak (Too Much of Not Enough), and Robert Ostrom (Sandhour). The four writers will explore the unsaid, the uncharted, and the untold, examining how pain, healing, trauma, and resilience can cross generations.

American-born Catherine knows little of her Croatian mother's early life. When Marijana dies of ovarian cancer, twenty-two-year-old Catherine finds herself cut off from the past she never really knew. As Catherine searches for clues to her mother's elusive history, she discovers that Marijana was orphaned during WWII, nearly died as a teenager, and escaped from Communist Yugoslavia to Rome, and then South America. Through travel and memory, history and imagination, Catherine resurrects the relatives she's never known. Traversing time and place, memoir and novel, this lyrical narrative explores the collective memory between mothers and daughters, and what it means to find wholeness. It is a story where a daughter gives voice to her immigrant mother's unspoken history, and in the process, heals them both.

Catherine Kapphahn’s Immigrant Daughter: Stories You Never Told Me received The Center for Fiction’s Christopher Doheny Award. It was also shortlisted for a Del Sol Press Prize. She has received artist grants from the Queens Council on the Arts. Her writing has appeared in Astoria Magazine, the Feminist Press Anthology This is the Way We Say Goodbye, CURE Magazine, and SalonZine. She earned an M.F.A. in writing from Columbia University and B.A. from Hunter College. Catherine is an adjunct lecturer at City University of New York at Lehman College in the Bronx, where her students’ brave stories continue to inspire her. Catherine also is a yoga teacher. She grew up in near the mountains in Colorado and now lives between two bridges in Queens, New York with her husband and two sons.

Mary Catherine Ford is a writer based in Queens. Her work has appeared in The Independent, The Chicago Tribune, World Literature Today, and Entropy Magazine, among others. Her essay "Catholic Bodies or Notes on the Kavanaugh Hearings" is the forthcoming collection of women's essays reflecting on the Trump era, Fury.

Jane Pollak is an artist, author, and entrepreneur. For more than 30 years, she has transformed and energized the lives of hundreds of women and men through her expert coaching. She’s also inspired thousands more through her extensive writing and speaking. She has been a highly successful life and business coach since 2002 and a certified Professional Co-Active Coach (CPCC) since 2006. She is the author of 3 books, Too Much of Not Enough, Soul Proprietor: 101 Lessons From a Lifestyle Entrepreneur, and Decorating Eggs: Exquisite Designs with Wax & Dye. She has been profiled by the New York Times and has made appearances on NBC’s The Today Show and The CBS Evening News. Known to many as “The Egg Lady,” Jane decorated eggs for three decades using the intricate Ukrainian method of wax resist. So extraordinary and exquisite were these eggs, and so remarkable was her story, that Jane was invited to present a talk at TEDxMillRiver.

Too Much of Not Enough: A Memoir (Paperback)