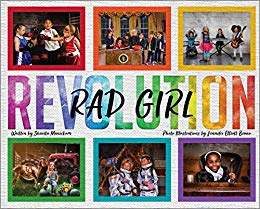 Join Book Culture LIC on Saturday, March 16th at 11:30am for a special storytime with Sharita Manickam and Jennifer Elliott Bruno as they read from their new book, Rad Girl Revolution.

Portraying real little girls in careers where women are often underrepresented, RAD Girl Revolution is a fun and powerful way to show young girls some of the endless possibilities for their future.

shouting "QUIET ON THE SET!"

And working with your crew

to make the greatest movie yet!

You can be a lawyer,

When it's something you believe in,

it is always worth the fight.

So set your mind and focus on the dreams you will pursue,

And you will be unstoppable, there's nothing you can't do!

RAD Girl Revolution begins with several uplifting verses like the one above, and ends with an enthusiastic mantra that will help your girls reaffirm their confidence and self-worth.

"Young girls need to see role models in whatever careers they may choose, just so they can picture themselves doing those jobs someday. You can't be what you can't see." - Sally Ride

The pages of RAD Girl Revolution are full of diversity. The book features girls representing over 30 ethnic backgrounds, and also includes girls with special needs such as Down syndrome, hearing loss, and Type 1 Diabetes.

Photos of real girls help further drive home the reality of the inspirational message of the book, because seeing really is believing! Plus, as anyone with kids knows, children LOVE looking at photographs of other kids!

Studies show that gender stereotypes are set in children as early as age 6, so it is crucial to reach both girls AND BOYS during the critical developmental ages of 3-8 years old while their expectation of gender roles are still forming. Exposing them to empowering portrayals of girlswill help your kids grow to support, encourage, and demand equality.

Get RAD Girl Revolution for every young girl you know to empower, inspire, and encourage her to dream BIG!

Sharita Manickam grew up in Maryland. After graduating from the University of Maryland, she moved to New York City, where she worked in marketing until her first daughter was born. During the next couple of years, Sharita discovered a passion for writing and co-wrote a television drama pilot script for a major network. Her love of writing coupled with her love of reading to her daughters sparked the idea of a children's book. Sharita lives in Forest Hills, NY with her husband Maurice and their two RAD daughters, Leela and Ella. RAD Girl Revolution is her first book.

Jennifer Elliott Bruno grew up and attended college in Kansas. Pursuing a career in property management, she relocated to Tallahasee, FL, where she met her husband, George. The couple moved to New York City where they soon became parents to a little boy named Henry. Shortly after his birth, Jennifer pursued her passion by opening a photography business. She currently resides with her family and miniature dachshund in Forest Hills, NY.