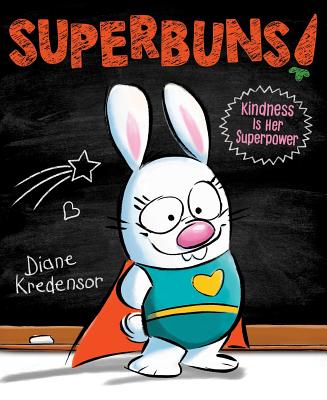 Join us at Book Culture LIC on Saturday, July 13th at 11:30am for a special storytime with Diane Krednesor, as she reads from her new picturebook, Superbuns!: Kindness Is Her Superpower.

For fans of Fred Rogers in Won’t You Be My Neighbor? and Be Kind, a little bunny, who dreams of being a superhero, proves to her know-it-all older sister that kindness really is a superpower.

Some superheroes can leap tall buildings in a single bound, some can crawl up a wall, some grow wolfsharp claws, and some have superhuman speed. And Superbuns? Her superpower is being kind. Super kind. She can’t help but be kind: watering a neighbor’s daisies; helping a friend cross the street; feeding a hungry goldfish.

Superbuns’s older sister Blossom is a super know-it-all who doesn’t believe kindness is a superpower. Not one bit. And all this kindness is slowing them down on their way to Grammy’s house, where a yummy carrot cobbler awaits.

But the sisters are being followed by a little fox, and when Blossom learns the fox is not after their cobbler but is lost, she discovers kindness really is a superpower after all.

Diane Kredensor is an Emmy Award–winning artist, director, and producer for her work on animated TV shows such as Pinky and the Brain, Clifford the Big Red Dog, and WordWorld. She runs Tricycle Films, where she has created, developed, and contributed to programs for Nickelodeon, Warner Bros., the Disney Channel, PBS, MTV, and the Sesame Workshop. Diane happily lives in Brooklyn, New York, with her partner, their son, and two stinky cats. Visit her at DianeKredensor.com.

Superbuns!: Kindness Is Her Superpower (Hardcover)