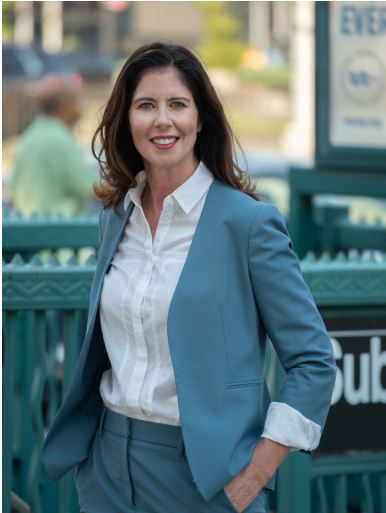 Elizabeth Crowley is running for Queens Borough President. Elizabeth’s campaign is about proposing bold solutions that move beyond politics as usual. That’s why she is talking about creating a new rail line in Queens – the QNS, having the borough become carbon neutral, and getting more women and people of color elected to office.

Elizabeth Crowley was a New York City Council Member for 9 years and was elected as the first woman and only Democrat ever elected to represent the 30th Council District - covering the Queens neighborhoods of Glendale, Maspeth, Middle Village, Ridgewood, parts of Richmond Hill, Woodside and Woodhaven. During her time on the New York City Council, Elizabeth served as Chair of the Committee on Fire & Criminal Justice Services and Co-Chair of the Council’s Women’s Caucus.

In early 2017, Elizabeth was named Chairwoman of the Board of the 21 in '21 Initiative, a non-profit she co-founded with former speaker Melissa Mark-Viverito. 21 in '21 is dedicated to better gender balance in local office with a goal of increasing the number of women elected to at least 21 positions by the year 2021.

Elizabeth has been a strong advocate for transportation improvements and is currently spearheading the Friends of QNS Rail, which formed an advocacy non profit organization in June 2019. The QNS Rail is a plan to reactivate the Lower Montauk Branch of the LIRR for local commuters. This much needed transportation improvement would help to better serve hundreds of thousands of local Queens residents.

Elizabeth was born and raised in Queens. She is the 14th of 15 children born to Mary and Walter Crowley, who were both dedicated to community service. Elizabeth and her family, including her two sons Dennis and Owen, live in Glendale.