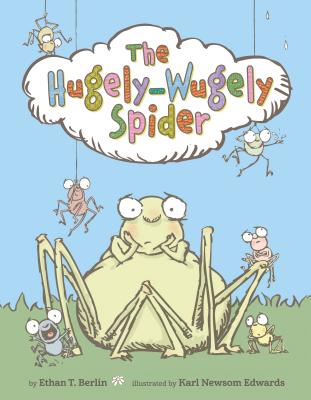 Join us at Book Culture LIC on Sunday, June 2nd at 11:30am for a special storytime with author Ethan T. Berlin, as he reads from his picturebook, The Hugely-Wugely Spider.

The Hugely-Wugely Spider went up the water spout, well not really, because he wasn't invited by the other spiders. And maybe because his size was bit of an issue . . . But that didn't stop him from trying. The Itsy-Bitsy Spider and his friends get into a bind when down comes the rain and threatens to wash them out, and only the Hugely-Wugely Spider can save them. With his quick thinking and huge thorax, Hugely-Wugely clogs the drain and saves the day.

Ethan T. Berlin is an Emmy Award-nominated television comedy writer and a Junior Library Guild selected picture book author. His debut picture book, The Hugely-Wugely Spider, was called “a hilarious twist on an old fingerplay” by Kirkus Review. Ethan’s TV credits include “Billy On the Street,” “Totally Biased with W. Kamau Bell,” and “Da Ali G Show.” He co-created IFC’s comedy game show, “Bunk.”  Most recently, Ethan served as head writer and executive producer for TruTV’s “Paid Off,” which was named as “Noteworthy” by The NY Times. He teaches comedy writing at NYU and SUNY Stonybrook.

Karl Newsom Edwards is a children’s picture book author and illustrator. Born in Oakland, California, he is a graduate of the California College of the Arts with a degree in drawing. He made his debut as an author/illustrator with Fly! He lives in Portland, Oregon.