NYPL: Molly Guptill Manning on "When Books Went to War"

The New York Public Library's Mid Manhattan Library is hosting an event for When Books Went to War: The Stories that Helped Us Win World War II, with author Molly Guptill Manning.

This illustrated lecture tells the story of a beloved and nearly forgotten government program, of distributing 120 million paperbacks, cheaply printed and distributed free, to deployed troops, to keep up morale. Book Culture will have a table at the event to sell copies of the book. This event takes place at NYPL's Mid Manhattan branch.

Synopsis: When America entered World War II in 1941, we faced an enemy that had banned and burned 100 million books. Outraged librarians launched a campaign to send free books to American troops andgathered 20 million hardcover donations. In 1943, the War Department and the publishing industry stepped in with an extraordinary program: 120 million small, lightweight paperbacks for troops to carry in their pockets and rucksacks in every theater of war. These Armed Services Editions were beloved by the troops and are still fondly remembered today. Soldiers read them while waiting to land at Normandy, in hellish trenches in the midst of battles in the Pacific, in field hospitals, and on long bombing flights. They helped rescue"The Great Gatsby"from obscurity and made Betty Smith, author of"A Tree Grows in Brooklyn, "into a national icon."When Books Went to War"is the inspiring story of the Armed Services Editions, and a treasure for history buffs and book lovers alike.

Molly Guptill Manning is a staff attorney at the United States Court of Appeals for the Second Circuit and sits on the board of editors of the Federal Bar Council Quarterly. She earned a B.A. and M.A. in American history from the University at Albany and a J.D. at the Benjamin N. Cardozo School of Law. Molly lives in Manhattan with her husband. 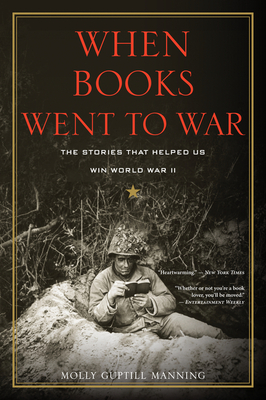