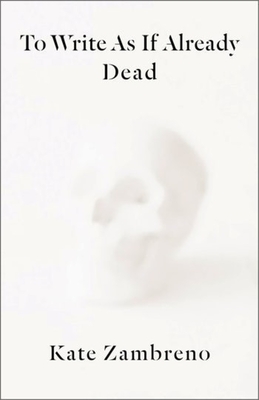 Please join Book Culture and our friends at the SOF/Heyman for a celebration of Kate Zambreno's newest book, To Write as if Already Dead.  Professor Zambreno will be joined in conversation with Sofia Samatar, Susan Bernofsky, Jenny Davidson, and Leslie Jamison.  The date of the event will be announced in the near future.

To Write as if Already Dead
by Kate Zambreno

To Write As If Already Dead circles around Kate Zambreno’s failed attempts to write a study of Hervé Guibert’s To the Friend Who Did Not Save My Life. In this diaristic, transgressive work, the first in a cycle written in the years preceding his death, Guibert documents with speed and intensity his diagnosis and disintegration from AIDS and elegizes a character based on Michel Foucault.

The first half of To Write As If Already Dead is a novella in the mode of a detective story, searching after the mysterious disappearance of an online friendship after an intense dialogue on anonymity, names, language, and connection. The second half, a notebook documenting the doubled history of two bodies amid another historical plague, continues the meditation on friendship, solitude, time, mortality, precarity, art, and literature.

Throughout this rigorous, mischievous, thrilling not-quite study, Guibert lingers as a ghost companion. Zambreno, who has been pushing the boundaries of literary form for a decade, investigates his methods by adopting them, offering a keen sense of the energy and confessional force of Guibert’s work, an ode to his slippery, scarcely classifiable genre. The book asks, as Foucault once did, “What is an author?” Zambreno infuses this question with new urgency, exploring it through the anxieties of the internet age, the ethics of friendship, and “the facts of the body”: illness, pregnancy, and death.

Kate Zambreno is the author of many acclaimed books, including Drifts, Appendix Project, Screen Tests, Book of Mutter, and Heroines. Her writing has appeared in the Paris Review, Virginia Quarterly Review, and elsewhere. She teaches in the graduate nonfiction program at Columbia University and is the Strachan Donnelley Chair in Environmental Writing at Sarah Lawrence College. She is a 2021 Guggenheim Fellow in Nonfiction.

Sofia Samatar is the author of the novels A Stranger in Olondria and The Winged Histories, the short story collection, Tender, and Monster Portraits, a collaboration with her brother, the artist Del Samatar. Her work has won several awards, including the World Fantasy Award. She teaches African literature, Arabic literature, and speculative fiction at James Madison University.

Susan Bernofsky directs the literary translation program in the School of the Arts MFA Writing Program at Columbia University. She has translated over twenty books, including seven by the great Swiss-German modernist author Robert Walser, Kafka’s The Metamorphosis, Hesse’s Siddhartha, and most recently The End of Days by Jenny Erpenbeck.

Jenny Davidson is Professor of English and Comparative Literature at Columbia University. She is the author of four novels, Heredity, The Explosionist, Invisible Things, and The Magic Circle. In 2020 her edition of an unpublished novel, The Duchess of Angus, written in the 1950s and set in 1940s San Antonio, was published by Trinity University Press.

Leslie Jamison is an American novelist and essayist. She is the author of the 2019 essay collection Make it Scream, Make It Burn, the 2010 novel The Gin Closet and the 2014 essay collection The Empathy Exams. Jamison also directs the non-fiction concentration in writing at Columbia University's School of the Arts.