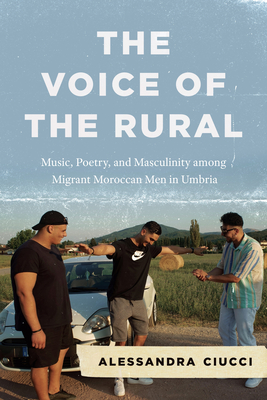 Please join Book Culture and our friends at SOF/Heyman on Wednesday, November 16th at 6:15pm for a celebration of Alessandra Ciucci's newest book, The Voice of the Rural.  Professor Ciucci will be joined in conversation with Virginia Danielson, Kevin Fellezs, Brinkley Messick, and Chris Washburne.

The Voice of the Rural: Music, Poetry, and Masculinity among Migrant Moroccan Men in Umbria
by Alessandra Ciucci

Umbria is known to most Americans for its picturesque rolling hills and medieval villages, but to the many migrant Moroccan men who travel there, Umbria is better known for the tobacco fields, construction sites, small industries, and the outdoor weekly markets where they work. Marginalized and far from their homes, these men turn to Moroccan traditions of music and poetry that evoke the countryside they have left— l-’arubiya, or the rural. In this book, Alessandra Ciucci takes us inside the lives of Moroccan workers, unpacking the way they share a particular musical style of the rural to create a sense of home and belonging in a foreign and inhospitable nation. Along the way, she uncovers how this culture of belonging is not just the product of the struggles of migration, but also tied to the reclamation of a noble and virtuous masculine identity that is inaccessible to Moroccan migrants in Italy.

The Voice of the Rural allows us to understand the contemporary experiences of migrant Moroccan men by examining their imagined relationship to the rural through sound, shedding new light on the urgent issues of migration and belonging.

Alessandra Ciucci received a PhD in music (ethnomusicology) from The City University of New York at The Graduate Center. Her research interests include: the music of Morocco, the Maghreb, the Mediterranean, gender and sexuality, sung poetry, popular music of the Arab world, and music and migration. Her first book, The Voice of the Rural (University of Chicago Press, 2022), explores the significance and the endurance of a specific notion of the rural (l-'arubiya), in music, poetry and the voice among migrant Moroccan men in the Umbria region of Italy. She is an Associate Professor of Music at Columbia University and currently a Fellow at the Institute for Ideas and Imagination in Paris.

Virginia Danielson is an Associate of the Harvard Music Department and Visiting Scholar at NYU Abu Dhabi. Previously, she served as the Director of Libraries at NYUAD and as Richard F. French Librarian of the Loeb Music Library at Harvard University and the Curator of the University’s Archive of World Music; she taught occasionally in Harvard’s Music Department. An ethnomusicologist by training, Danielson is the author of the award-winning monograph “The Voice of Egypt:” Umm Kulthum, Arabic Song and Egyptian Society in the 20th Century and co-editor of The Middle East, volume 6 of The Garland Encyclopedia of World Music. Danielson is also a co-editor of the book, Music in Arabia (Indiana University Press, 2021).

Kevin Fellezs joined the Department of Music faculty as an Assistant Professor of Music and African American Studies in 2012, in a joint appointment with the Institute for Research in African American Studies at Columbia. He was previously on the faculty of the University of California at Merced. He holds the PhD in History of Consciousness (American Studies) from the University of California, Santa Cruz.His recent book titled Listen But Don’t Ask Question: Hawaiian Slack Key Guitar Across the TransPacific (Duke University Press, 2019) shows the ways in which slack key guitar is a site for the articulation of Hawaiian values.

Brinkley Messick is a Professor in the Department of Anthropology at Columbia University. Writing and reading, considered as cultural and historical phenomena, have figured centrally in his research on Islamic societies in both Arabia and North Africa. This work considers the production and circulation, inscription, and subsequent interpretation of Arabic texts such as regional histories, law books, and court records. His two current projects are on shari'a litigation, focusing on doctrine and court records and questions of truth and method, and evidence and interpretation; and on the agrarian shari'a, concerning the relations of landed property, trade, state, and family.

Chris Washburne is a Professor of Music and Chair of the Music Department at Columbia University and the Founder of Columbia’s Louis Armstrong Jazz Performance Program. Chris Washburne has published numerous articles on jazz, Latin jazz, and salsa. His books include Bad Music: the Music We Love to Hate (Routledge, 2004), Sounding Salsa: Performing Latin Music in New York (Temple University Press, 2008), and Latin Jazz: the Other Jazz (Oxford University Press, 2020).

The Voice of the Rural: Music, Poetry, and Masculinity among Migrant Moroccan Men in Umbria (Chicago Studies in Ethnomusicology) (Paperback)