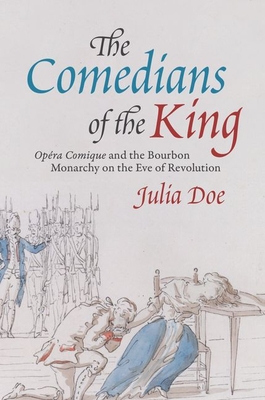 Please join Book Culture and our friends at SOF/Heyman Center on Wednesday, October 27th at 6:15pm for a celebration of new work by Professor Julia Doe including The Comedians of the King: "Opéra Comique" and the Bourbon Monarchy on the Eve of Revolution.  Professor Doe will be joined in conversation with Olivia Bloechl, Elaine Sisman, Joanna Stalnaker, and Walter Frisch.

The Comedians of the King: "Opéra Comique" and the Bourbon Monarchy on the Eve of Revolution
by: Julia Doe

Lyric theater in ancien régime France was an eminently political art, tied to the demands of court spectacle. This was true not only of tragic opera (tragédie lyrique) but also its comic counterpart, opéra comique, a form tracing its roots to the seasonal trade fairs of Paris. While historians have long privileged the genre’s popular origins, opéra comique was brought under the protection of the French crown in 1762, thus consolidating a new venue where national music might be debated and defined.

In The Comedians of the King, Julia Doe traces the impact of Bourbon patronage on the development of opéra comique in the turbulent prerevolutionary years. Drawing on both musical and archival evidence, the book presents the history of this understudied genre and unpacks the material structures that supported its rapid evolution at the royally sponsored Comédie-Italienne. Doe demonstrates how comic theater was exploited in, and worked against, the monarchy’s carefully cultivated public image—a negotiation that became especially fraught after the accession of the music-loving queen, Marie Antoinette. The Comedians of the King examines the aesthetic and political tensions that arose when a genre with popular foundations was folded into the Bourbon propaganda machine, and when a group of actors trained at the Parisian fairs became official representatives of the sovereign, or comédiens ordinaires du roi.

Julia Doe is Assistant Professor of Music and Historical Musicology at Columbia University. She is a scholar of eighteenth-century opera, with particular emphasis on the music, literature, and politics of the French Enlightenment. Her essays and reviews have appeared or are forthcoming in the Journal of the American Musicological Society, Studies in Eighteenth-Century Culture, Eighteenth-Century Music, Music & Letters, Current Musicology, Renaissance Quarterly, and in the edited collection Histoire de l’opéra français.

Olivia Bloechl is Professor of Music at the University of Pittsburgh and the author of Native American Song at the Frontiers of Early Modern Music and coeditor of Rethinking Difference in Music Scholarship. Her historical research and teaching emphasize European early music, French opera in the seventeenth and eighteenth centuries, early Atlantic colonialism, and racial representation in musical theater before 1800.

Elaine Sisman is the Anne Parsons Bender Professor of Music at Columbia University. The author of Haydn and the Classical Variation, Mozart: The 'Jupiter' Symphony, and editor of Haydn and His World, she specializes in music of the 18th and 19th centuries, and has written on such topics as memory and invention in late Beethoven, ideas of pathétique and fantasia around 1800, Haydn's theater symphonies, the sublime in Mozart's music, and Brahms's slow movements.

Joanna Stalnaker is Paul Brooke Program Chair for Literature Humanities and Professor of French at Columbia University. Her first book, The Unfinished Enlightenment: Description in the Age of the Encyclopedia, was awarded the Kenshur Prize from the Center for Eighteenth-Century Studies at Indiana University. Her articles on Diderot, Rousseau, Buffon, Deffand and other writers have appeared in Representations, Journal of the History of Ideas, Critique and Diderot Studies.

Walter Frisch is H. Harold Gumm/Harry and Albert von Tilzer Professor of Music at Columbia University. Professor Frisch is a specialist in the music of composers from the Austro-German sphere in the nineteenth and twentieth centuries, ranging from Schubert to Schoenberg. His publications include Brahms and His World; The Early Works of Arnold Schoenberg, 1893-1908; German Modernism: Music and the Arts, among many others.

The Comedians of the King: "Opéra Comique" and the Bourbon Monarchy on the Eve of Revolution (Hardcover)