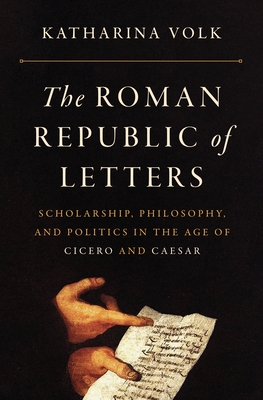 Please join Book Culture and our friends at SOF/Heyman on Thursday, December 2nd at 6:15 for a celebration of Katharina Volks's newest book, The Roman Republic of Letters: Scholarship, Philosophy, and Politics in the Age of Cicero and Caesar.  Professor Volk will be joined in conversation with Yelena Baraz, Gareth Williams, Pamela Smith, and Carmela V. Franklin.

The Roman Republic of Letters: Scholarship, Philosophy, and Politics in the Age of Cicero and Caesar
by: Katharina Volk

In The Roman Republic of Letters, Katharina Volk explores a fascinating chapter of intellectual history, focusing on the literary senators of the mid-first century BCE who came to blows over the future of Rome even as they debated philosophy, history, political theory, linguistics, science, and religion.

It was a period of intense cultural flourishing and extreme political unrest—and the agents of each were very often the same people. Members of the senatorial class, including Cicero, Caesar, Brutus, Cassius, Cato, Varro, and Nigidius Figulus, contributed greatly to the development of Roman scholarship and engaged in a lively and often polemical exchange with one another. These men were also crucially involved in the tumultuous events that brought about the collapse of the Republic, and they ended up on opposite sides in the civil war between Caesar and Pompey in the early 40s. Volk treats the intellectual and political activities of these “senator scholars” as two sides of the same coin, exploring how scholarship and statesmanship mutually informed one another—and how the acquisition, organization, and diffusion of knowledge was bound up with the question of what it meant to be a Roman in a time of crisis.

By revealing how first-century Rome’s remarkable “republic of letters” was connected to the fight over the actual res publica, Volk’s riveting account captures the complexity of this pivotal period.

Katharina Volk is Professor of Classics at Columbia University. Professor Volk is the author of The Poetics of Latin Didactic: Lucretius, Vergil, Ovid, Manilius, Manilius and his Intellectual Background (recipient of the 2010 Lionel Trilling Book Award), and Ovid. Her many articles range in topic from Homeric formula and Aratean letter play to Ciceronian poetry, Ovidian time, Senecan dramaturgy, and beyond.

Yelena Baraz is Kennedy Foundation Professor of Latin Language and Literature and Professor of Classics at Princeton University. Her first book, entitled A Written Republic: The Cultural Politics of Cicero's Philosophy, was published by Princeton University Press in 2012. She has written articles on Pliny, Vergil, and both Senecas, and has contributed lexicographical articles to the Thesaurus Linguae Latinae.

Gareth Williams is Anthon Professor of Latin Language and Literature at Columbia University. He is the author of Banished Voices: Readings in Ovid’s Exile Poetry, The Curse of Exile: A Study of Ovid’s Ibis, Proceedings of the Cambridge Philological Society, The Cosmic Viewpoint: A Study of Seneca’s Natural Questions, among others.

Pamela Smith is Seth Low Professor of History and Director of the Center for Science and Society at Columbia University. Her current research focuses on attitudes to nature in early modern Europe and the Scientific Revolution, with particular attention to craft knowledge and historical techniques.

Carmela V. Franklin is Professor of Classics at Columbia University. Among her recent publications are The Latin Dossier of Anastasius the Persian: Hagiographic Translations and Transformations, which follows an interdisciplinary approach to early medieval culture, transcending traditional linguistic and geographical boundaries; and Material Restoration: An 11th Century Fragment from Echternach in a 19th Century Parisian Codex, a study in “material philology.”

The Roman Republic of Letters: Scholarship, Philosophy, and Politics in the Age of Cicero and Caesar (Hardcover)