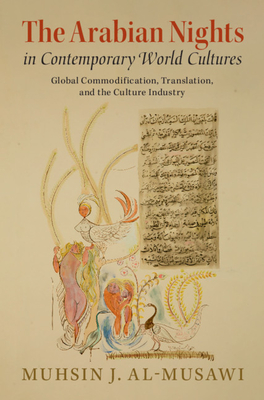 Please join Book Culture and our friends at SOF/Heyman Center on Wednesday, September 29th at 6:15pm for a celebration of new work by Professor Muhsin al-Musawi including The Arabian Nights in Contemporary World Cultures.  Professor al-Musawi will be joined in conversation with David Damrosch, Sarah R. bin Tyeer, Madeleine Dobie, and Hamid Dabashi.

The Arabian Nights in Contemporary World Cultures
by: Muhsin al-Musawi

The stories in the Thousand and One Nights, or the Arabian Nights, are familiar to many of us: from the tales of Aladdin, Sinbad the Sailor, Ali Baba and his forty thieves, to the framing story of Scheherazade telling these stories to her homicidal husband, Shahrayar. This book offers a rich and wide-ranging analysis of the power of this collection of tales that penetrates so many cultures and appeals to such a variety of predilections and tastes. It also explores areas that were left untouched, like the decolonization of the Arabian Nights, and its archaeologies. Unique in its excavation into inroads of perception and reception, Muhsin J. al-Musawi's book unearths means of connection with common publics and learned societies. Al-Musawi shows, as never before, how the Arabian Nights has been translated, appropriated, and authenticated or abused over time, and how its reach is so expansive as to draw the attention of poets, painters, illustrators, translators, editors, musicians, political scientists like Leo Strauss, and novelists like Michel Butor, James Joyce and Marcel Proust amongst others. Making use of documentaries, films, paintings, novels and novellas, poetry, digital forums and political jargon, this book offers nuanced understanding of the perennial charm and power of this collection.Attendance and Registration Policy:

Muhsin al-Musawi is professor of classical and modern Arabic literature, comparative and cultural studies at Columbia University. A renowned scholar and literary critic, his teaching and research interests span several periods and genres. Professor al-Musawi is the author of thirty-nine books (including six novels) and over sixty scholarly articles.

Sarah R. bin Tyeer is an Assistant Professor at the Department of Middle Eastern, South Asian, and African Studies at Columbia University. Her recent publications include essays in the volumes: Qur’an and Adab: The Shaping of Classical Literary Tradition, The Beloved in Middle East Literature: The Culture of Love and Languishing, and The City in Premodern and Modern Arabic Literature.

Madeleine Dobie is Chair and Director of Graduate Studies of the Department of French at Columbia University. Her current book project, After Violence: Cultural Renewal in Contemporary is about literature, cinema and other forms of artistic expression in contemporary Algeria.

Hamid Dabashi is the Hagop Kevorkian Professor of Iranian Studies and Comparative Literature at Columbia University. He has written 22 books, edited four, and contributed chapters to many more. He is also the author of over 100 essays, articles and book reviews on subjects ranging from Iranian Studies, medieval and modern Islam, and comparative literature to world cinema and the philosophy of art (trans-aesthetics).