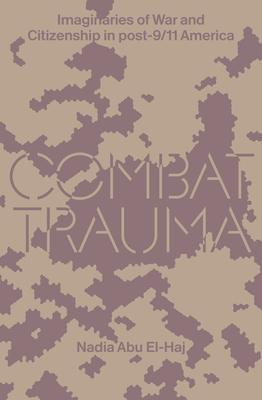 Please join Book Culture and our friends at SOF/Heyman on Thursday, November 17th at 6:15pm for a celebration of Nadia Abu El-Haj's newest book, Combat Trauma: Imaginaries of War and Citizenship in post-9/11 America.  Professor Abu El-Haj will be joined in conversation with Thomas W. Dodman, Catherine Fennell, and Miriam Ticktin.

Americans have long been asked to support the troops and care for veterans’ psychological wounds. Who, though, does this injunction serve?

As acclaimed scholar Nadia Abu El-Haj argues here, in the American public’s imagination, the traumatized soldier stands in for destructive wars abroad, with decisive ramifications in the post-9/11 era. Across the political spectrum the language of soldier trauma is used to discuss American warfare, producing a narrative in which traumatized soldiers are the only acknowledged casualties of war, while those killed by American firepower are largely sidelined and forgotten.

In this wide-ranging and fascinating study of the meshing of medicine, science, and politics, Abu El-Haj explores the concept of post-traumatic stress disorder and the history of its medical diagnosis. While antiwar Vietnam War veterans sought to address their psychological pain even as they maintained full awareness of their guilt and responsibility for perpetrating atrocities on the killing fields of Vietnam, by the 1980s, a peculiar convergence of feminist activism against sexual violence and Reagan’s right-wing “war on crime” transformed the idea of PTSD into a condition of victimhood. In so doing, the meaning of Vietnam veterans’ trauma would also shift, moving away from a political space of reckoning with guilt and complicity to one that cast them as blameless victims of a hostile public upon their return home. This is how, in the post-9/11 era of the Wars on Terror, the injunction to "support our troops," came to both sustain US militarism and also shields American civilians from the reality of wars fought ostensibly in their name.

In this compelling and crucial account, Nadia Abu El-Haj challenges us to think anew about the devastations of the post-9/11 era.

Nadia Abu El-Haj is Ann Whitney Olin Professor in the Departments of Anthropology at Barnard College and Columbia University, Co-Director of the Center for Palestine Studies, and Chair of the Governing Board of the Society of Fellows/Heyman Center for the Humanities at Columbia University. She also serves as Vice President and Vice Chair of the Board at The Institute for Palestine Studies in Washington DC. The recipient of numerous awards, including from the Social Science Research Council, the Wenner Gren Foundation, the MacArthur Foundation, the Harvard Academy for Area and International Studies, the Institute for Advanced Study at Princeton, and the Harry Frank Guggenheim Foundation, she is the author of numerous journal articles published on topics ranging from the history of archaeology in Palestine to the question of race and genomics today.

Thomas W. Dodman is an Assistant Professor of French at Columbia University. His first book, What Nostalgia Was: War, Empire, and the Time of a Deadly Emotion explores how people once died of nostalgia in order to tell a larger story about social transformation and alienation in the eighteenth and nineteenth centuries. He also co-edits the French journal Sensibilités: histoire, critique & sciences sociales, and serves on the editorial board of Critical Historical Studies.

Catherine Fennell’s work examines the cultural transformation of the American welfare state and the effects of this transformation on the politics of citizenship, belonging and race within redeveloping cities. Through her ethnographic research, she has focused on how large-scale changes in the urban built environment shape the ways in which urbanites come to understand social difference, and practice new forms of social care, concern and intimacy.

Miriam Ticktin is an Associate Professor of Anthropology at the CUNY Graduate Center. She came from the New School for Social Research, where she was Chair of Anthropology from 2016-2018, Co-Director of the Zolberg Institute on Migration and Mobility [newschool.edu] between 2013-2016 and Director of Gender Studies from 2012-2013. She received her PhD in Anthropology at Stanford University and the École des hautes études en sciences sociales in Paris, France, and an MA in English Literature from Oxford as a Rhodes Scholar. Miriam also was a Fellow in the Society of Fellows (2002-2004).