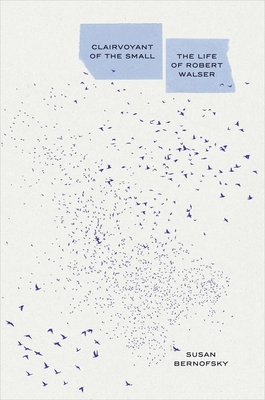 Please join Book Culture and our friends at SOF/Heyman Center on Thursday, October 21st at 6:15pm for a celebration of new work by Professor Susan Bernofsky: Clairvoyant of the Small: The Life of Robert Walser.  Professor Bernofsky will be joined in conversation with Mark Wunderlich, Rivka Galchen, Annie Pfeifer, and Lis Harris.

Clairvoyant of the Small: The Life of Robert Walser
by: Susan Bernofsky

The great Swiss-German modernist author Robert Walser lived eccentrically on the fringes of society, shocking his Berlin friends by enrolling in butler school and later developing an urban-nomad lifestyle in the Swiss capital, Bern, before checking himself into a psychiatric clinic. A connoisseur of power differentials, his pronounced interest in everything inconspicuous and modest—social outcasts and artists as well as the impoverished, marginalized, and forgotten—prompted W. G. Sebald to dub him “a clairvoyant of the small.” His revolutionary use of short prose forms won him the admiration of Franz Kafka, Walter Benjamin, Robert Musil, and many others.

He was long believed an outsider by conviction, but Susan Bernofsky presents a more nuanced view in this immaculately researched and beautifully written biography. Setting Walser in the context of early twentieth century European history, she provides illuminating analysis of his extraordinary life and work, bearing witness to his “extreme artistic delight.”

Susan Bernofsky is associate professor of writing at Columbia University School of the Arts and director of the literary translation program in Columbia’s MFA Writing Program. She has translated over twenty books, including eight works of fiction by Robert Walser, as well as novels and poetry by Jenny Erpenbeck, Yoko Tawada, Franz Kafka, Hermann Hesse, Uljana Wolf, and others.

Mark Wunderlich’s collections of poetry include The Anchorage, and Voluntary Servitude. Since 2003 he has been a member of the Literature Faculty at Bennington College in Vermont, and where he become the first director of Poetry at Bennington. In 2017 he was appointed the Director of the Bennington Writing Seminars graduate writing program. Wunderlich has taught in the graduate writing programs at Columbia University, Sarah Lawrence College, Ohio University and San Francisco State University.

Rivka Galchen is an assistant professor of writing at Columbia University's School of the Arts. She is also an award winning fiction writer and journalist, whose work appears often in The New Yorker, Harper’s, The London Review of Books and The New York Times. Her most recent book is Everyone Knows Your Mother Is a Witch, about a woman accused of witchcraft in 17th century Germany.

Annie Pfeifer is assistant professor of Germanic Languages at Columbia University. She has published articles in The New German Critique, German Life and Letters, and the peer-reviewed volumes Que(e)rying Consent and Iran and the West. Together with Reto Sorg, the Director of the Robert Walser Center in Switzerland, she edited “Walk I absolutely Must,” a collection of essays on Robert Walser and the culture of walking.

Lis Harris, a staff writer at The New Yorker for more than two decades, is the Chair of Columbia University’s School of the Arts Writing Program, where she has taught since 1996. In addition to innumerable articles, reviews and commentaries, she is the author of Holy Days: The World of a Hasidic Family, a New York Times Notable Book of the Year, Rules of Engagement -- Four Couples and American Marriage, and Tilting at Mills.

Clairvoyant of the Small: The Life of Robert Walser (Hardcover)