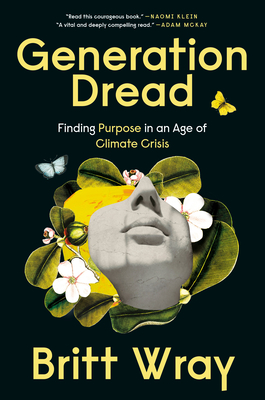 Please join Book Culture and our friends at SOF/Heyman on Tuesday, October 18th at 6:00pm for a celebration of Britt Wray's newest book, Generation Dread.  Wray will be joined in conversation M. Katherine Shear and Kate Marvel.

Climate and environment-related fears and anxieties are on the rise everywhere. As with any type of stress, eco-anxiety can lead to lead to burnout, avoidance, or a disturbance of daily functioning.

In Generation Dread, Britt Wray seamlessly merges scientific knowledge with emotional insight to show how these intense feelings are a healthy response to the troubled state of the world. The first crucial step toward becoming an engaged steward of the planet is connecting with our climate emotions, seeing them as a sign of humanity, and learning how to live with them. We have to face and value eco-anxiety, Wray argues, before we can conquer the deeply ingrained, widespread reactions of denial and disavowal that have led humanity to this alarming period of ecological decline.

It’s not a level playing field when it comes to our vulnerability to the climate crisis, she notes, but as the situation worsens, we are all on the field—and unlocking deep stores of compassion and care is more important than ever. Weaving in insights from climate-aware therapists, critical perspectives on race and privilege in this crisis, ideas about the future of mental health innovation, and creative coping strategies, Generation Dread brilliantly illuminates how we can learn from the past, from our own emotions, and from each other to survive—and even thrive—in a changing world.

Britt Wray is a writer and broadcaster researching the emotional and psychological impacts of the climate crisis. Born and raised in Toronto, Canada, she is a postdoctoral fellow at Stanford University and the London School of Hygiene & Tropical Medicine, where she investigates the mental health consequences of ecological disruption. She holds a PhD in science communication from the University of Copenhagen. Her work has been featured in the New York Times, Washington Post, Guardian and Globe and Mail, among other publications. She has hosted several podcasts, radio and TV programs with the BBC and CBC, is a TED Resident, and writes Gen Dread, a newsletter about staying sane in the climate crisis: gendread.substack.com.

M. Katherine Shear, MD is the Marion E. Kenworthy Professor of Psychiatry at Columbia University and the founding Director of the Center for Complicated Grief at Columbia School of Social Work. Dr. Shear is a clinical researcher who first worked in anxiety and depression and held several academic appointments in these areas. For the last two decades, she has focused on understanding and treating people who experience persistent intense grief. She developed and tested prolonged grief disorder therapy (PGDT) (previously called complicated grief therapy: CGT), a short-term targeted intervention and confirmed its efficacy in three large NIMH-funded studies. PGDT is strength-based and focused on fostering adaptation to loss. Dr. Shear is widely recognized for her work in bereavement, including both research and clinical awards from the Association for Death Education and Counseling and invited authorship of articles for Uptodate and the New England Journal of Medicine. Dr. Shear is also engaged in teaching and training students and professionals of several mental health disciplines in the identification and treatment of prolonged grief disorder. She is a graduate of the University of Chicago and Tufts University School of Medicine, and completed residencies in internal medicine and psychiatry at New York City medical centers.

Kate Marvel teaches in Columbia's MA in Climate and Society Program and writes the "Hot Planet" column for Scientific American. She uses climate models, observations, paleoclimate reconstructions, and basic theory to study climate change. Her work has identified human influences on present-day cloud cover, rainfall patterns, and drought risk. She is also interested in future climate changes, particularly climate feedback processes and the planet's sensitivity to increased carbon dioxide. Named one of "15 Women Who Will Save the World" by Time Magazine, she has been profiled by the New York Times and Rolling Stone, and her 2017 TED talk has been viewed over one million times. Before becoming a climate scientist, she received a PhD in theoretical particle physics from Cambridge University, where she was a Gates scholar.