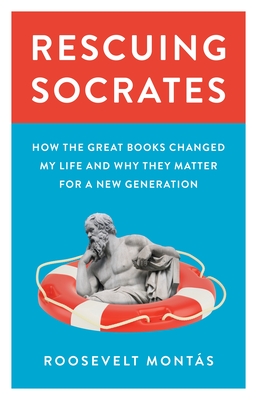 Please join Book Culture and our friends at SOF/Heyman on Wednesday, February 2nd at 6:15pm for a celebration of Roosevelt Montás's newest book, Rescuing Socrates.  Professor Montas will be joined in conversation with Andrew Delbanco, David Denby, Turkuler Isiksel, and Dan-el Padilla Peralta.

Rescuing Socrates: How the Great Books Changed my Life and Why They Matter for a New Generation
by:
Roosevelt Montás

What is the value of a liberal education? Traditionally characterized by a rigorous engagement with the classics of Western thought and literature, this approach to education is all but extinct in American universities, replaced by flexible distribution requirements and ever-narrower academic specialization. Many academics attack the very idea of a Western canon as chauvinistic, while the general public increasingly doubts the value of the humanities. In Rescuing Socrates, Dominican-born American academic Roosevelt Montás tells the story of how a liberal education transformed his life, and offers an intimate account of the relevance of the Great Books today, especially to members of historically marginalized communities.

Montás emigrated from the Dominican Republic to Queens, New York, when he was twelve and encountered the Western classics as an undergraduate in Columbia University’s renowned Core Curriculum, one of America’s last remaining Great Books programs. The experience changed his life and determined his career—he went on to earn a PhD in English and comparative literature, serve as director of Columbia’s Center for the Core Curriculum, and start a Great Books program for low-income high school students who aspire to be the first in their families to attend college.

Weaving together memoir and literary reflection, Rescuing Socrates describes how four authors—Plato, Augustine, Freud, and Gandhi—had a profound impact on Montás’s life. In doing so, the book drives home what it’s like to experience a liberal education—and why it can still remake lives.

Roosevelt Montás is Senior Lecturer in American Studies and English at Columbia University. His dissertation, Rethinking America: Abolitionism and the Antebellum Transformation of the Discourse of National Identity, won Columbia University’s 2004 Bancroft Award. He is Director of the Center for American Studies’ Freedom and Citizenship Program in collaboration with the Double Discovery Center.

Andrew Delbanco is Alexander Hamilton Professor of American Studies at Columbia University. He is the author of College: What It Was, Is, and Should Be, Melville: His World and Work, The Death of Satan, Required Reading: Why Our American Classics Matter Now, The Real American Dream, and The Puritan Ordeal, among other books. Professor Delbanco's essays appear regularly in The New York Review of Books and other journals, on topics ranging from American literary and religious history to contemporary issues in higher education.

David Denby is a staff writer at The New Yorker. He served as a film critic for the magazine from 1998 to 2014. His first article for The New Yorker, “Does Homer Have Legs?,” published in 1993, grew into a book, Great Books: My Adventures with Homer, Rousseau, Woolf, and Other Indestructible Writers of the Western World, about reading the literary canon at Columbia University. His other subjects for the magazine have included the Scottish Enlightenment, the writers Susan Sontag and James Agee, and the movie directors Clint Eastwood and the Coen brothers.

Turkuler Isiksel is Associate Professor of Political Science at Columbia and works in contemporary political theory. Her research has appeared in Human Rights Quarterly, the European Journal of International Law, the International Journal of Constitutional Law (I*CON), Global Constitutionalism, the European Law Journal, and Constellations. Isiksel is particularly interested in how descriptive and normative categories tailored to the nation-state apply to political institutions beyond that context, and combines the perspectives of normative theory, legal analysis, and institutionalist political science in her work.

Dan-el Padilla Peralta is an associate professor of classics at Princeton University who researches and teaches the Roman Republic and early Empire, as well as classical reception in contemporary American and Latin American cultures. In 2015, he published a memoir Undocumented: A Dominican boy’s odyssey from a homeless shelter to the Ivy League on the intersection of migratory subjectivity and Dominican identity with his formation as a classicist. He has also written for The Guardian, Matter, and Vox.

By registering for this event, you agree to be respectful towards speakers and other audience members and to refrain from inappropriate or disruptive behavior and/or harassment of any kind including, but not limited to: hate speech, spam comments, slurs, obscenities, etc. Any attendees who violate these guidelines will be immediately ejected from the event.

Rescuing Socrates: How the Great Books Changed My Life and Why They Matter for a New Generation (Hardcover)